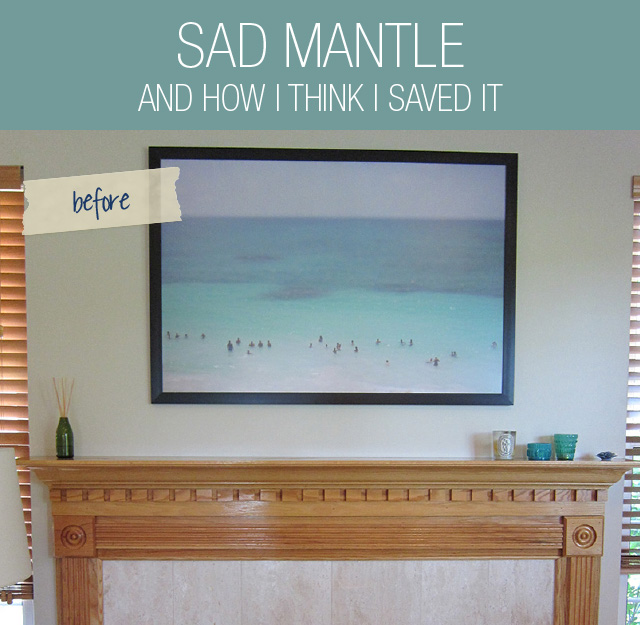 this mantle makes emily henderson cry…seriously, it does. it needed a makeover…badly. one of the best features in a home might just be the fireplace and mine was embarrassing. to say the least it was not the fireplace of my dreams. in fact, a large part of me wanted to take a sledge hammer to it. but rather to take things to such extremes (mainly because we have been living in construction zone central for almost 3 years), i chose to dip my toes in the mantle makeover. to keep it quick, clean and easy, i decided to keep the ugly molding and even uglier marble and gave it a simple facelift. (the boy and i discussed painting it white, but since all of our trim was medium wood, we thought it might look weird.)

i’ve tried to place things i love over it to mask it’s ugliness. one of my favorite pieces is the max wanger “tulum” photo. i purchased it two years ago before it made a giant splash in the interior design scene. i thought i had nailed it until i saw my girl crush, emily henderson, frame it in white about 6 months later. my heart sunk…IT LOOKS SOOOOO MUCH BETTER! i also loved the turquoise tea lights from jayson home and garden. they tie in the ocean colors just perfectly! they were to stay.

it’s been looking like this for a couple years now, but it wasn’t until i posted my to-do list that things really came to a head. something HAD to be done with this mantle…so i watched this…over and over and over again.

option number one of finding a commanding piece…i had knocked it out of the park out with that tulum photo. it was substantial without being overpowering and it took up just the right amount of space. booya!

the objects, vases, books, collections piece was where i had been tripping myself up. see, my mantle was not deep. in fact, it was less then 6″ deep…sad face. so i went on a hunt and scoured etsy, flea markets, and everything i had existing in my home. i wanted stylish eclectic pieces that gave the entire mantle movement, added height, texture, softened edges and added layers. now, do all of that and stay in the 6″ depth restraint? challenge accepted. 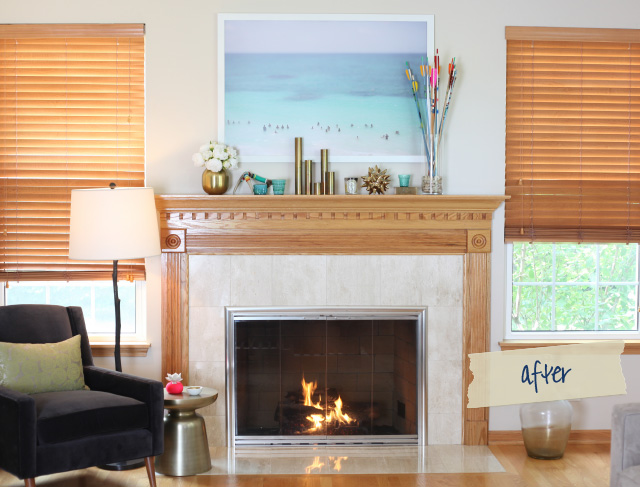 well, what do you think? i mean, it is still a work in progress. i need curtains to soften the edges and add warmth…and i think a fiddle fig tree might get popped into that far right corner to add in some greenery, but for now, i think it’s getting there! i no longer want to take a sledge hammer to it…in fact, i think i kinda like it! let’s come in for a closer look. 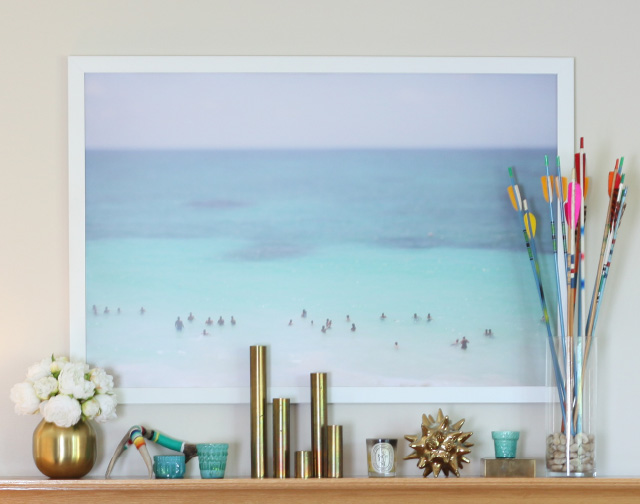 so what did i do? first and foremost, i felt horrible for making my girl emily cry for days on end…i immediately spray painted that frame white. at first the boy was against this…mainly because i was soon to paint his precious lush lawn white, but he eventually saw the light. i think to quote his exact words, “it doesn’t look so college anymore”, and i will have to agree with him. it looked cheap in the black frame and was too harsh. the white softened everything. i started with kils to really cover the black and then went over everything with white enamel. word to the wise, always cover kils or dust and yuck will stick to it. the process of taping, setup and spraying was about 1 hour and i had about 3 hours of dry time. we hung it and the clouds parted, the angels started to sing, the birds chirped…things were starting to look up!

i like brass, obvs. the sheen reflects a lot of light, it looks rich, and it’s patina on older pieces is just plain beautiful. that amazing gold vase is by nate berkus for target circa last year and i got it on clearance for like $3. it’s been making it’s rounds around the house, but i think it’s finally found its home. the peonies are silk (mainly because i’m not good about having fresh flowers in the house) from terrain. they add great texture. at the moment terrain is out of their silks, but they usually replenish in september.

the antlers are from yarn bombed. the woman who makes these by hand allows you to customize colors and pick your antler shed. i am personally fond of the traditional serape style. it adds a nice punch of color without being too powerful and the turquoise pulls the ocean colors as do the turquoise tea lights by jayson home and garden. if you remember, i mentioned this being a favorite…they are also quite affordable and i love the multitude of shapes and sizes. 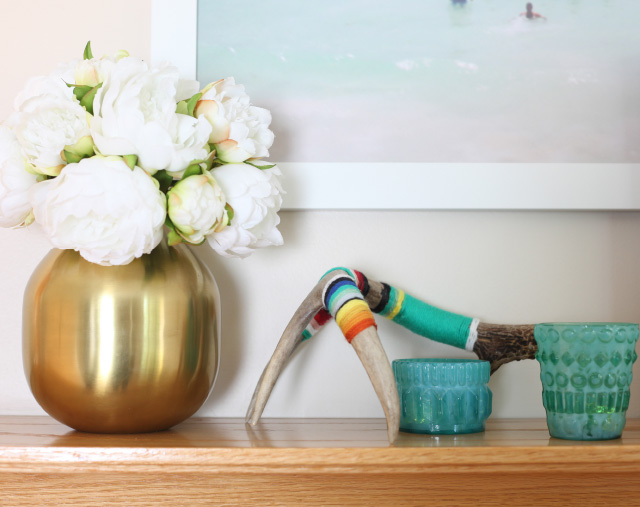 the various heights on the brass tea lights give height and interrupt the frame adding the layer effect that i wanted. they are also skinny little guys which also helped me add in some layers and depth.

this diptique tuberose candle has seen better days, but i refuse to toss it until i burn every last bit of it. it smells soooooo good!

the sea urchin is from dwell studios…i’m not entirely sold on it’s placement. don’t get me wrong, i love the piece, it just may not be right here, so it may get moved.

and let’s wrap this up with the vintage wooden arrows. i’ve housed them in a cylindrical clear vessel from target, filled it with some rocks (also from target) and popped in a few vintage arrows from lackluster co and gallivanting girls…both etsy shops. now we are talking serious height. 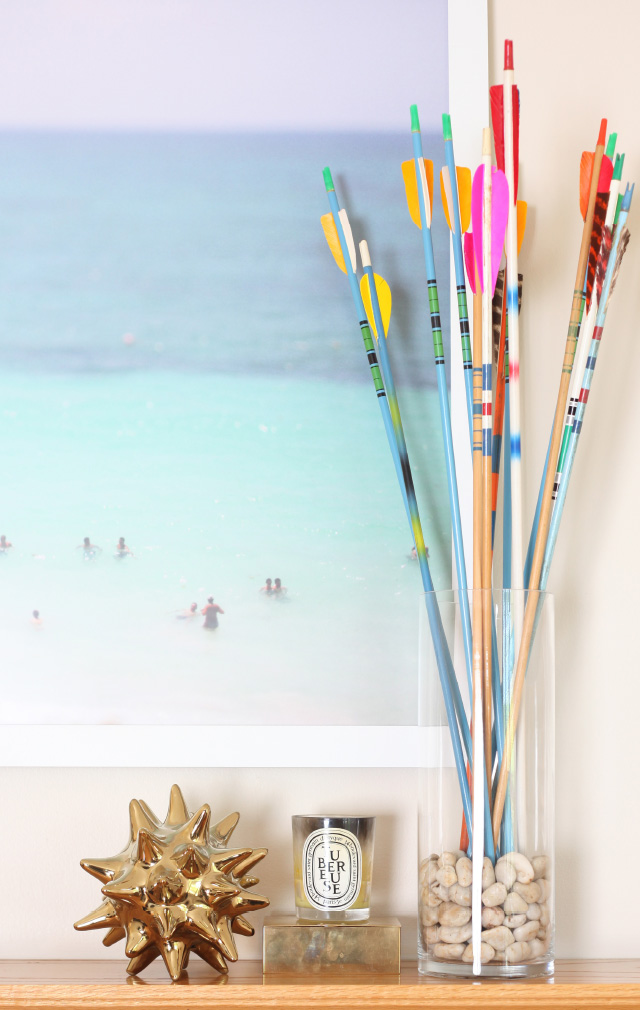 so it’s not perfect, BUUUUTTTTTT, it looks SOOOOOOO much more beautiful than it did! the intention was to be cozy and inviting, young and modern and not cluttered. so far, i absolutely love how it turned out. i need to add in a few more things, but i also need to save a few more bucks to attain such pretty little things. i think i also need to finds me some brass polish to rid that box of its fingerprints…in due time, in due time.

but before i go, i want to leave you guys with one last photo so you can see how far we’ve come. this is what the space looked like before we bought it…i think we’ve come a loooooong way and that gives me a great feeling of accomplishment. what do you think? 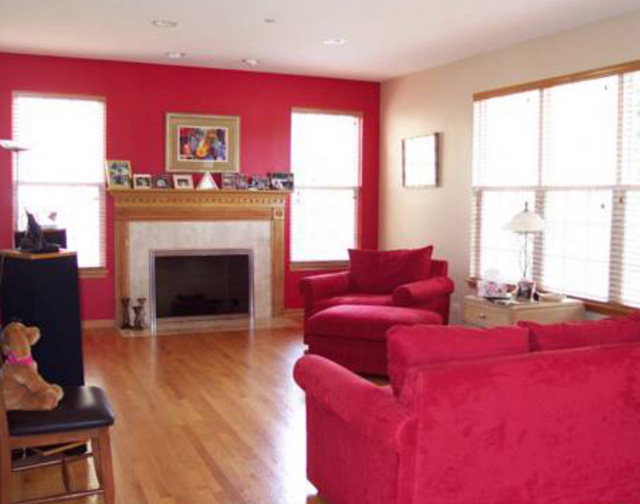