After purchasing a ceiling medallion and lighting last November, we finally installed it Saturday. You may have caught a few glimpses of the DIY on Instagram Stories, but if you missed it, here is the the full install in all its glory including the final reveal, which wound up looking killer. 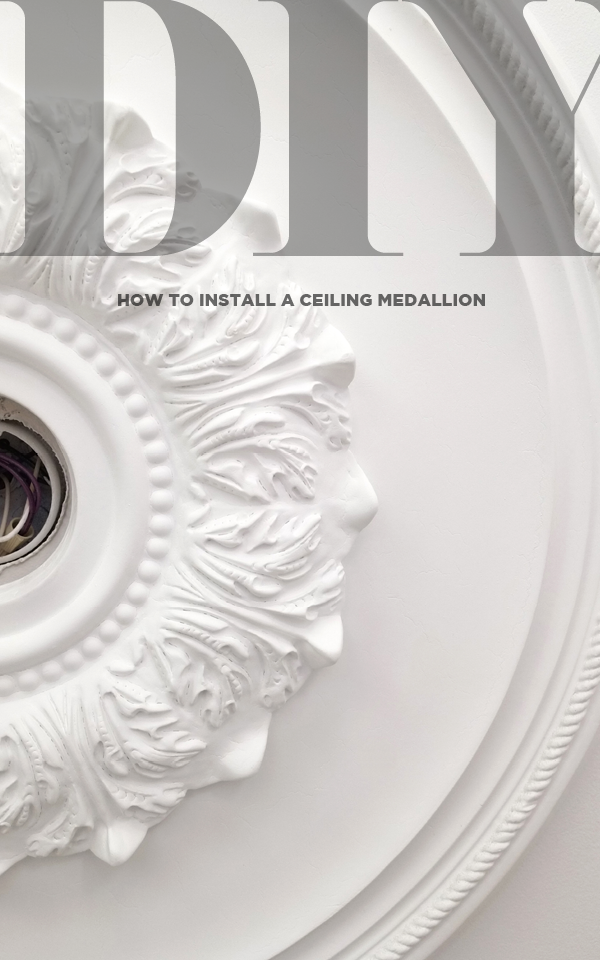 After about 2.5 minutes into the install, The Boy said…and I quote, “I am loathing this already. I’m envisioning much cursing, sweating, and a trip or 7 to Home Depot in my near future.” He was right. There was 1 trip to Home Depot and some sweat involved. There was also, “please, please, pretty please with sugar on top” uttered which is how we curse in front of the small children, so one could argue there was foul language. But all in all, it was surprisingly simple.

You may be asking yourself, why did 9 months to install? Well, the ceiling medallion bit just felt a bit intimidating. It was labeled plaster online. Would it crack? Would I be holding it above my head for hours while the glue dried? Did I buy the right size? Will the light fit? Would the medallion be too big for the space? It seemed right in my head, but I was still a bit nervous. However, now with my new found unemployment, I seem to have a lot more time on my hands. Plus The Boy wanted to control some order around the house. The stars aligned, and we became brave enough to tackle this project. 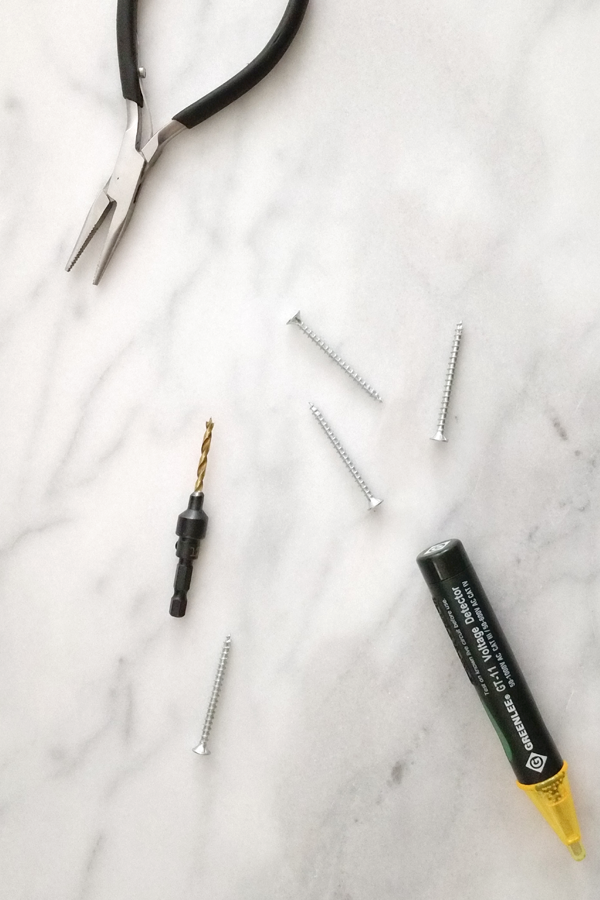 When we removed the ceiling medallion from the shipping box, we were relieved to find it was made of polyurethane foam but had a plaster-like coating. If you have a real plaster ceiling medallion, do not follow the instructions on this DIY. It’s just way to heavy for the Liquid Nails. It will fall and smash into a thousand pieces. 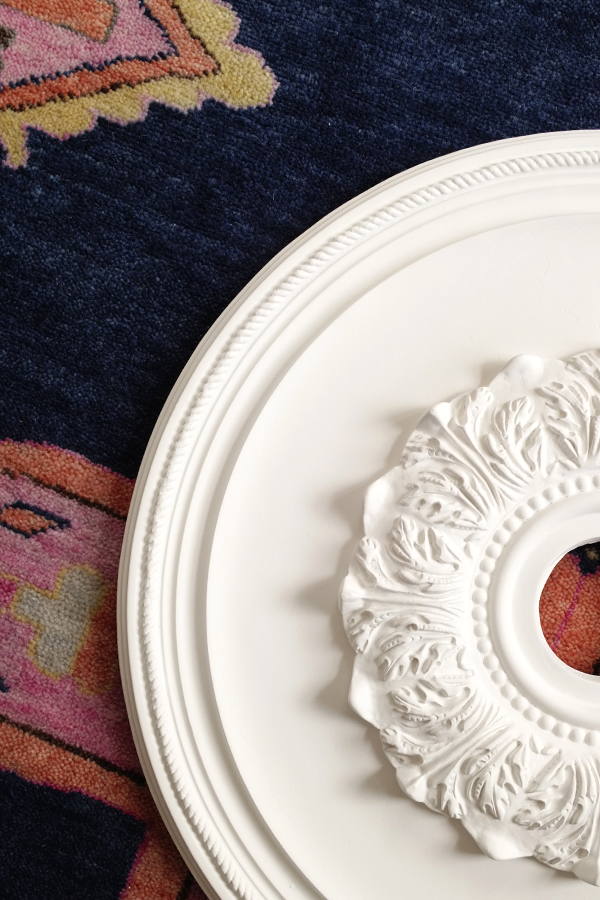 Our medallion arrived with a pre-made hole for the electrical wiring and was large enough to get to the junction box. Phew! If yours needs to be larger, or the hole needs to be cut, use a drywall saw.

First things first. Turn off the power. No one needs to be getting zapped.

Use an electrical tester on the wires to ensure the electricity is off. We have some glitchy electrical. Even though the fuse box says it’s off, some junction boxes still have current flowing through them. We’ve had to go back through and relabel switches, but even a year later, we find new mysteries. 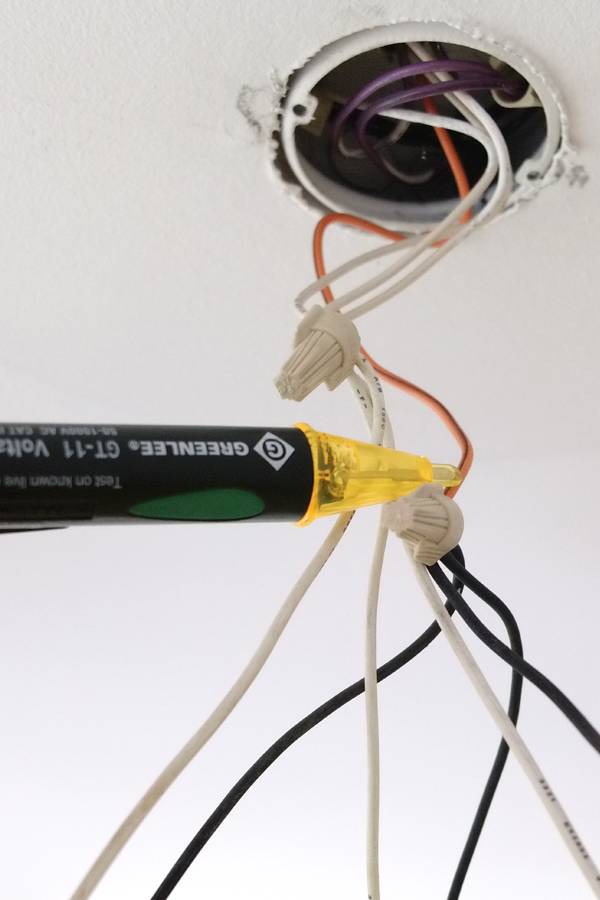 Once you are positive the electrical is off, trial fit the ceiling medallion and press it against the ceiling. It may not lie perfectly flat, but that is okay. That’s what the white caulk is for.

If your medallion is large like mine, you may want to consider drilling 2-4 pilot holes (be sure to drill deep enough to countersink the screw heads as you will be spackle-ing over them later). 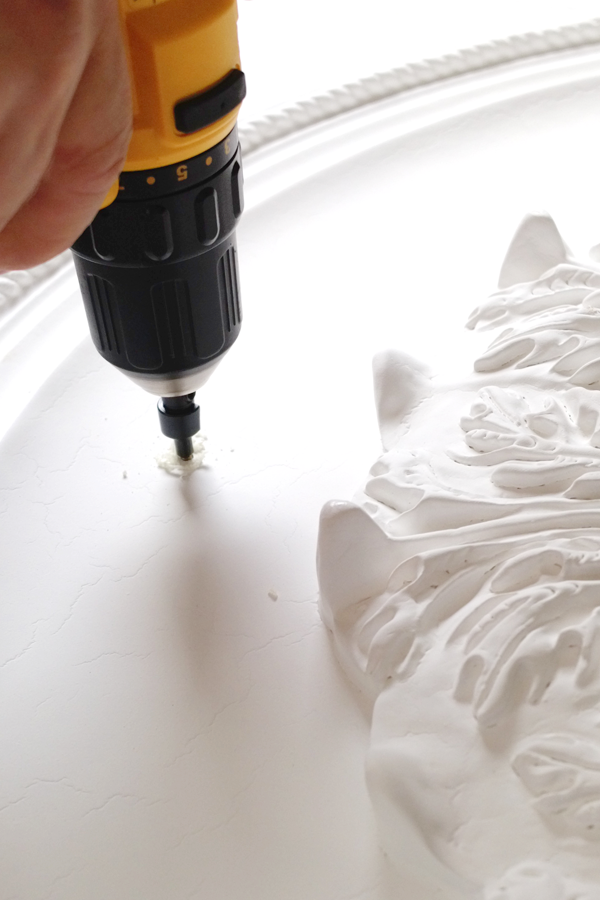 Carefully place the ceiling medallion on a flat surface (one that can get dirty, not a beautiful rug or carpet), and apply a generous bead of Liquid Nails to the back of the medallion. 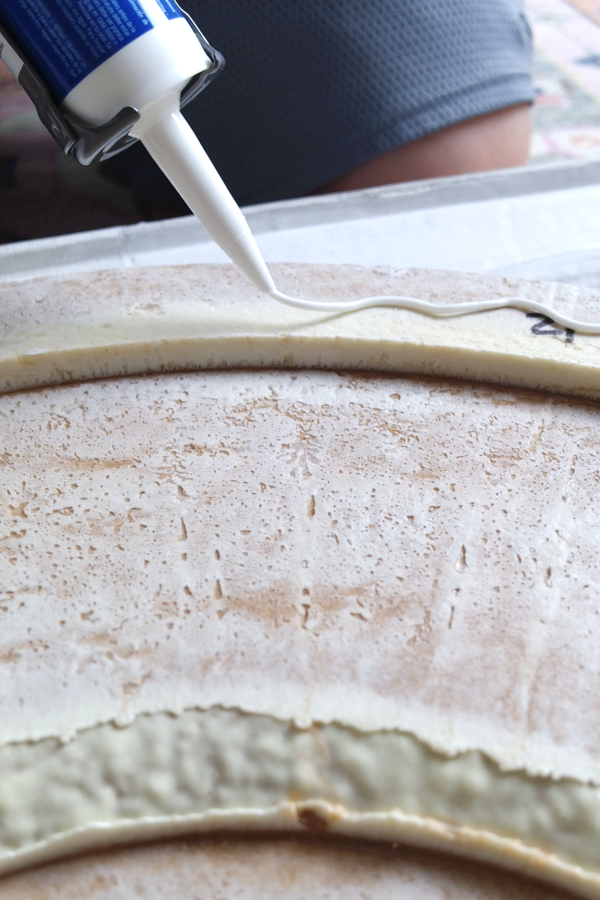 FYI, have a damp paper towel or three nearby. You’ll need them to clean the tip of the tube. Once the Liquid Nails start to flow, it takes a bit for it to stop.

Center the ceiling medallion over the electrical box and press firmly. 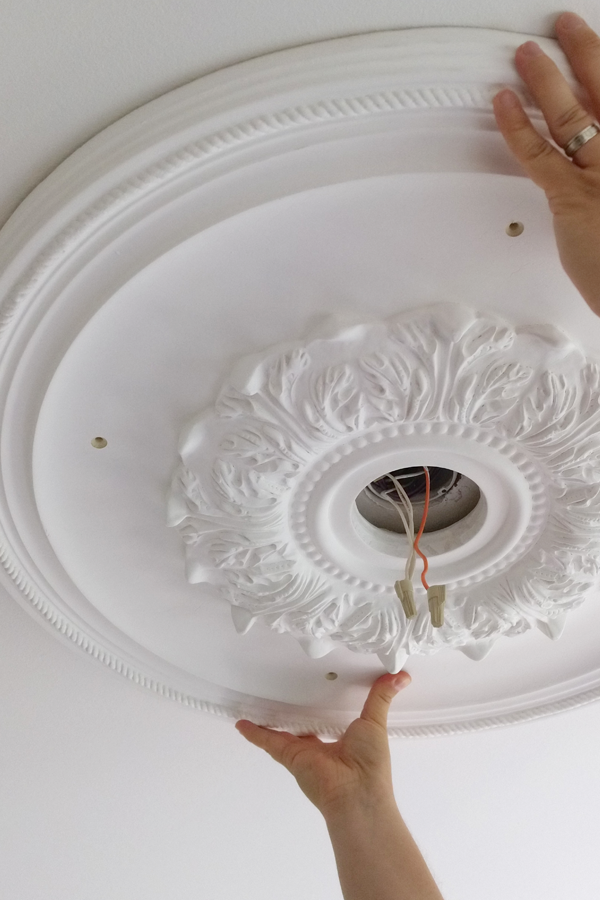 Now, remember those pilot holes? Take your drill and install a construction screw into each hole. See, no holding your arms above your head for hours while waiting for the adhesive to dry. If your medallion is small, this step probably not needed. 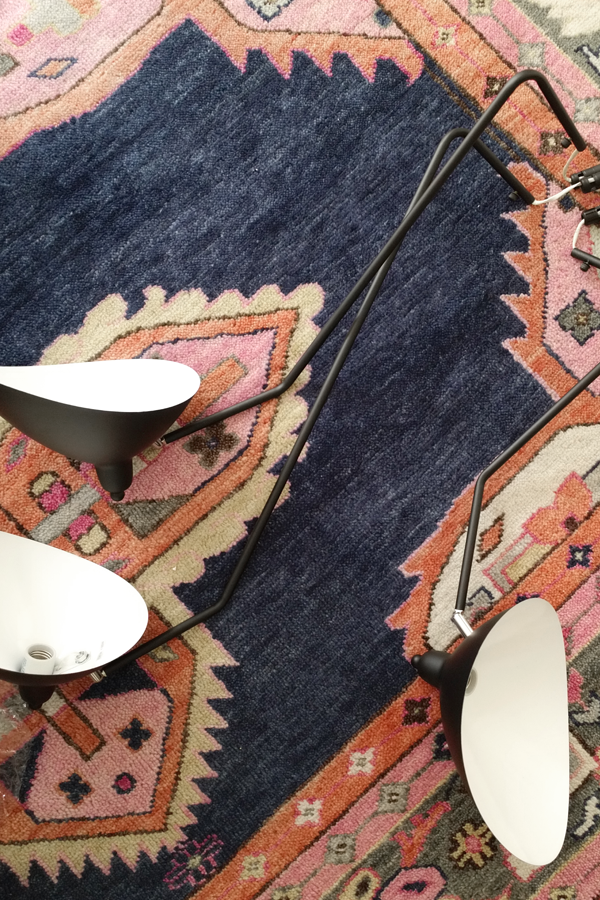 Now it’s time to install your light fixture. For safety sake, use that electrical tester again on the wires to ensure the electricity is off. Also, everyone asks me about my rug. You can find it here. 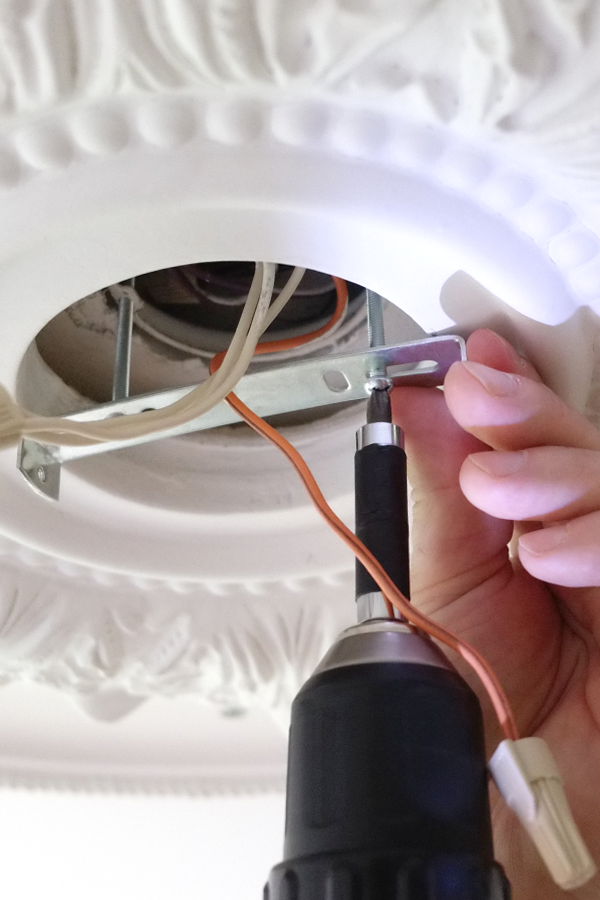 Once the lighting is attached. Turn the electricity back on and flip that light switch.

Hopefully this is your big moment. For us, we had a slight DIY fail. When we stuffed the wires back into the ceiling like a turkey, the wires came undone. Whomp, whomp. We wound up having to uninstall the lighting, rewire, and reinstall once, twice, three times a lady. So take your time shoving it back into the junction box. It was our only snafu. 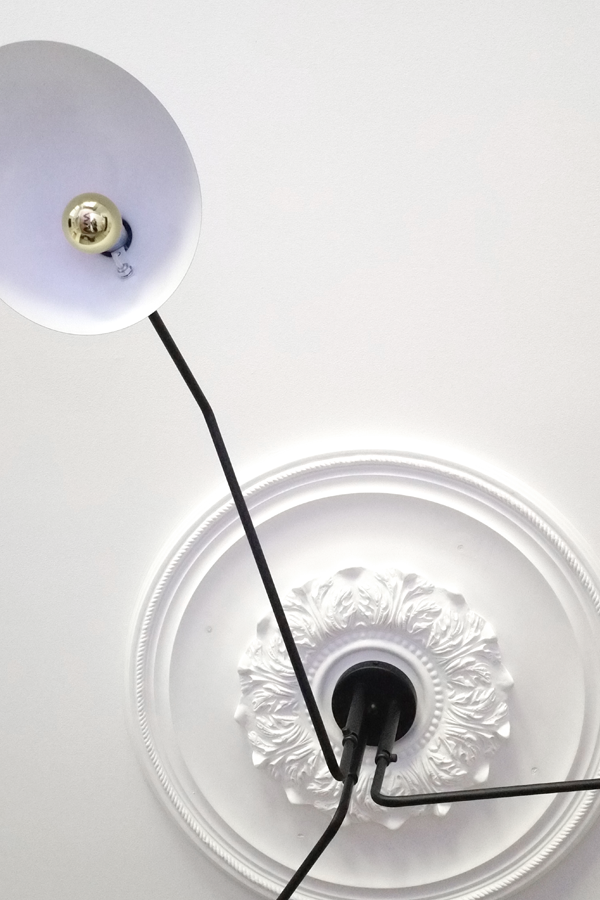 Our medallion didn’t sit completely flush to the ceiling’s surface (that’s normal), remember that white caulk. Grab the caulk gun (be sure to swipe out the Liquid Nails tube or your finger will be stuck to the ceiling and that would suck worse than reinstalling lighting).

Don those latex gloves. Hold the tube at a 45 degree angle, and pull the caulk gun along the edge of the ceiling medallion. Again, you may want some damp paper towel to clean the tip. 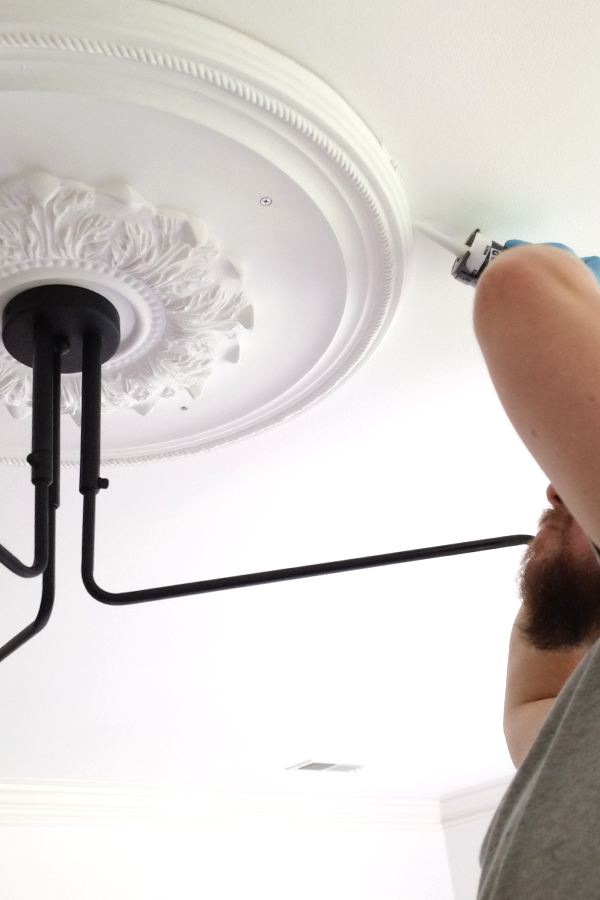 If you screwed your medallion to the ceiling, you’ll want to cover the holes with some spackle to hide them. Ta-da!!!!!! 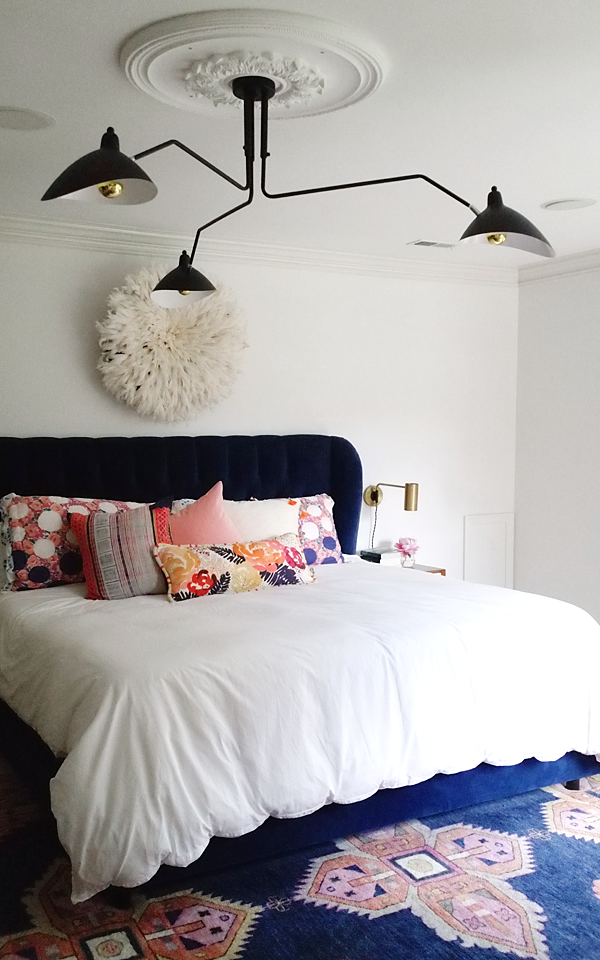 You’re done! Why we were so intimidated by this ceiling medallion DIY is beyond me. It was really quite easy and simple, and I’m in love with the end result. We’re going to keep ours white for now, but I’ve seen some painted that look incredible! If you decide to paint, be sure to wait until the adhesive, caulk, and spackle is completely dry. SO what do you think? Would you tackle this project?