The dreaded mammogram — before I had one, I pretty much grouped that appointment in with getting my teeth drilled. Word on the street was, they are painful and you have a machine squeeze your boobs flat into pancakes. I’m assuming you men would put it right up there with a prostate exam.

After having my second child, I asked my OBGYN about getting one. At the time I was 39 with no history of breast cancer. I had to wait until I was officially 40. Well, 40 came and went. As did 41, 42, and 43. After throwing my back out earlier this year, I had to go to the doc for a follow-up. On the drive to the clinic, NPR was talking about breast cancer. In the waiting room, Oprah was on the TV discussing…wait for it…breast cancer. I sat in the waiting room by a bunch of mammograms and early detection brochures. Okay, okay already! I’ll ask my doc to book the mammogram. Geez! I hear ya universe, loud and clear.

My primary gave me a work order to book a boob pancake, and I sat on it for another month until the morning news health report was on…you guessed it…breast cancer. Gah, where did I put that order? After searching stacks of mail, I found it in my closet, crumpled up and stashed in a purse I had swapped out. I called and got in the next morning at 6 am.

After hanging up the phone, anxiety kicked into high gear. My mind was racing with thoughts about psychic signs and Oprah, brochures, and chemo treatments. Suddenly, I swore I could feel itching in my left boob. BTDubs, don’t Google that symptom because the interwebs just tells you, you most certainly have breast cancer. I couldn’t sleep.

5:15 am I yanked myself outta bed and made my way over to the hospital. I hate hospitals. All I can think about are tubes and liquids and people dying. PTSD from the whole dead sister debacle. My anxiety was peaking to a level of panic attack. I had a sudden case of the 3 P’s: poop, puke, or pass out. (The easiest way to relieve yourself of a panic attack.) Unfortunately, because I was standing in the lobby, waiting in line, none of those were viable options. I took a deep breath and clenched my butt cheeks as tight as I could.

All I could think about was my old prescription of Lorazepam in my other purse. It could have come in handy. In retrospect, my apprehension was extreme and dramatic, to say the least. I was literally walking in for an x-ray and nothing more. I had taken this mammogram to a level of crazy.

The receptionist handed me one of those buzzer things you get while waiting for a table at Chilis. If you suffer from anxiety, you probably understand the 3 P’s quite well. It’s difficult to talk them down. There was a Starbucks in the lobby which looked fairly empty. I had no idea where the bathroom was located and didn’t want my buzzer and red lights to start going off. I walked over to the garbage can and passed some much-needed gas. Oh dear lord, there was a sofa behind that trash can! Someone is sitting in said sofa. Walk away…but I had opened the gates. How does someone have this much air in their body??? My buzzer started going off.

I made the walk of stinky shame over to check in and wound up backtracking thru again to get to the breast center. Oy vey. At least the panic attack had “vaporized”. At the breast center, they had me change into a mauve-colored wrap shirt with pink ties and sit in another smaller waiting room. Two other ladies, with matching shirts, looked up and then back down to the floor. Oprah was on the TV again talking about…you guessed it…breast cancer. *palm to forehead*.

No more than 5 minutes later, my name was called, and I walked into a dark room with a chair, a small sink, and a very large machine for which I assumed to be the pancake maker. I was sweating profusely and felt very stinky. No, not from farting but rather BO. The one no-no before a mammogram is to wear deodorant. Also no oils, no lotions. Since I had an early morning appointment, I figured I’d take the extra 30 minutes of sleep and take a shower when I got home. Bad idea.

The tech put on blue gloves and asked me to stand by the giant boob mashing machine. She lifted one up onto this little shelf and clamped it down. “Don’t breathe. Don’t move.” I held my breath waiting for the pancake of pain. The boob masher went buzz, buzz and she said, “Okay, you can breathe now.” Wait, wut??? THAT was what I was afraid of??? THAT is what made this morning so dramatic??? Srsly?

She did the second boob and sent me home on my merry way. The radiologist would review the mammogram and get back to my doctor in 2 days. As I walked back to the car I just shook my head. I couldn’t believe how I had stunk out the entire lobby of a hospital and sweat through my mauve gown. A complete and utter overreaction to such a simple procedure.

Don’t Freak Out During Your First Mammogram

Two days later, I got a call I wasn’t expecting. The radiologist had found microcalcifications and wanted me to come back for a follow-up mammogram. So what is the first thing you should do after hearing that news? You Google it, of course. Gah….NO! DO NOT DO THAT. But of course, I did it anyway. The page was filled with words like cancer, breast, precancerous, calcium deposits, genetic mutation, tissue, benign, malignant, signs of breast cancer, mayo clinic, Susan G. Komen, not cancerous, turns into cancer, suspicious, biopsy. Basically none of the words you ever want to read, ever.

My doctor called that same night around 7 pm. She told me not to worry. (In my head I’m thinking lady, you’re telling me don’t worry but you’re calling me personally for the first time ever. Way to put my mind at ease.) Microcalcifications were described to me as a cloud that was difficult to see through. Since this was my baseline mammogram, they had nothing to compare it to, and the radiologist just wanted to take a few more images at different angles…basically to see if anything else was hiding in there.

Again I drove over to the hospital, but this time no panic attack. I checked in and waited. This appointment was later in the day so there was more hustle and bustle…I also learned from my previous mistake and took a shower this time. A few guys sat in the waiting room just staring at the floor. I was unsure if they were patients or sweet husbands waiting for their wives. When the nurse called me in, I changed into my mauve gown with pink ties and again took a seat with the other ladies. They were all quite older than me. Then this started happening.

One of the men from the main waiting room sat with us ladies…he was not wearing a mauve gown, and instantly, the air was filled with awkwardness. The older ladies started shifting around in their seats, staring at each other in a full-blown silent tizzy. Now if these women felt uncomfortable, I can only imagine how the poor guy felt. The nurse shooed him out of the main waiting room and apologized to us profusely. I chuckled when the older woman named Pearl said, “Heavens, I didn’t know if I should even make eye contact with him!”Oh, Pearl. I’m not sure what she thought would happen. But who was I to judge, I nearly shat my pants a few days prior.

I was in and out of the boob mashing room in a jiffy, but unlike last time, I had to stick around. The radiologist was going to review the new images right then and there. I sat back down in the little room with all the other ladies and their mauve wraps. They looked at me and knew this was not normal protocol. Coral stood up and used her walker to make her way over to me.

“I like your shoes,” she said.
“Thanks”
“They look comfortable. It’s difficult to find sandals that are comfortable.”

I nodded.
This was going to be the longest 15 minutes of my life.

“Ya, these have a cork bottom, so they kinda mold to your foot.”
“Who makes those sandals?”
“Birkenstock.”
“Oh, I should have known they were Birkenstocks. I like my Merrills. They have a lot of support.”
“Ya, Merrills are great shoes.”

Coral looked at her walker. We didn’t have much else to say to each other. I texted my husband and Marianne. I scrolled through Twitter. I laughed out loud when I saw @wofanswers  “A     _ R _ _ P    _ _   _ _ _ S”   The answer: A GROUP OF TITS. That tweet couldn’t have been any more fitting for the occasion. Coral looked at me inquisitively, but I could possibly explain Twitter to her. Besides, Pearl might have gone into cardiac arrest. 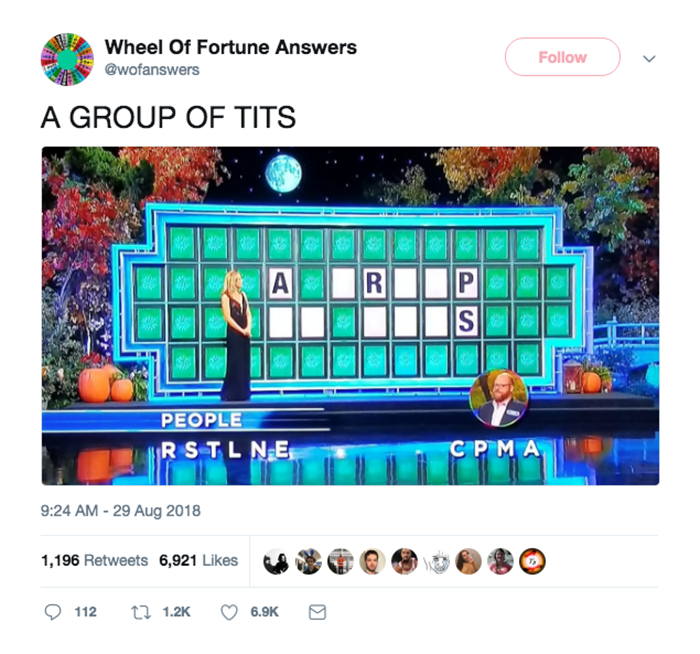 The nurse called me back, but this time into a different small room. If you’ve read the dead sister debacle, you know how I hate small rooms in hospitals. Bad news is relayed in small dimly lit rooms. She took a deep breath. Oh boy. I braced myself for the “C” word. “The radiologist is in the middle of a biopsy, and it’s taking longer than expected. I didn’t want you to worry.” Sweet Baby Jesus lady. You about gave me a heart attack woman.

I waited about another 20 minutes and was finally called back. Coral gave me the thumbs up. I smiled and said, “thank you”. The nurse had me sit down and the radiologist followed behind us. It’s funny, I have absolutely no idea what she said. It started off with microcalcifications can be…and then everything went slightly foggy until I heard, “It’s probably nothing, but since this is your baseline and we have nothing to compare it to, I’m asking you to come back in 6 months.” That’s it? “Yup, That’s it.”

So for now, I’m fine. Panic-free and feeling great. I’m glad I finally had a mammogram. Relieved actually. If you haven’t had a mammogram, are procrastinating, or just need to make your yearly appointment…please do it now. This is your reminder. Your sign. It’s not that bad, and it will put your mind at ease. If you’re dragging your feet because you’re anxious, hopefully, me sharing my experience puts your mind at ease.

If you’re one of those ladies who received the news I feared, I’m praying for you. I can’t imagine how scared you are. I wish you strength.

If you’re in the waiting room, wearing that same mauve gown, and see someone who looks worried. Channel Coral.

TikTok Diagnosed Me With Adult ADHD

Big Companies Got The PPP Loans

Finding Your Style With A Visual Moodboard

My Life In The World Of Unemployment

What I’d Tell My Younger Self