This Is Where We Live

The other day another mass shooting took place in a town I frequent quite often. On a street, I’ve driven down a thousand times. Near the Dairy Queen where I take my kids because it takes a Blizzard to stop the complaining of being dragged to an estate sale.

Today I’ve been sitting and staring at my computer. I can’t work. I can’t think. The only words that run through my head, “This is where we live.”

I grew up in a small town in Wisconsin where deer hunting season was a mandatory holiday. Owning a gun is the norm. Mass shootings didn’t really exist. And if they did, there was no social media or internet that existed to inform me. But today’s grim reality is that Americans are living in a nightmare of gun violence. How did we get here? There’s no good answer to that question. It’s layers upon layers of politics, money, power, and fear. 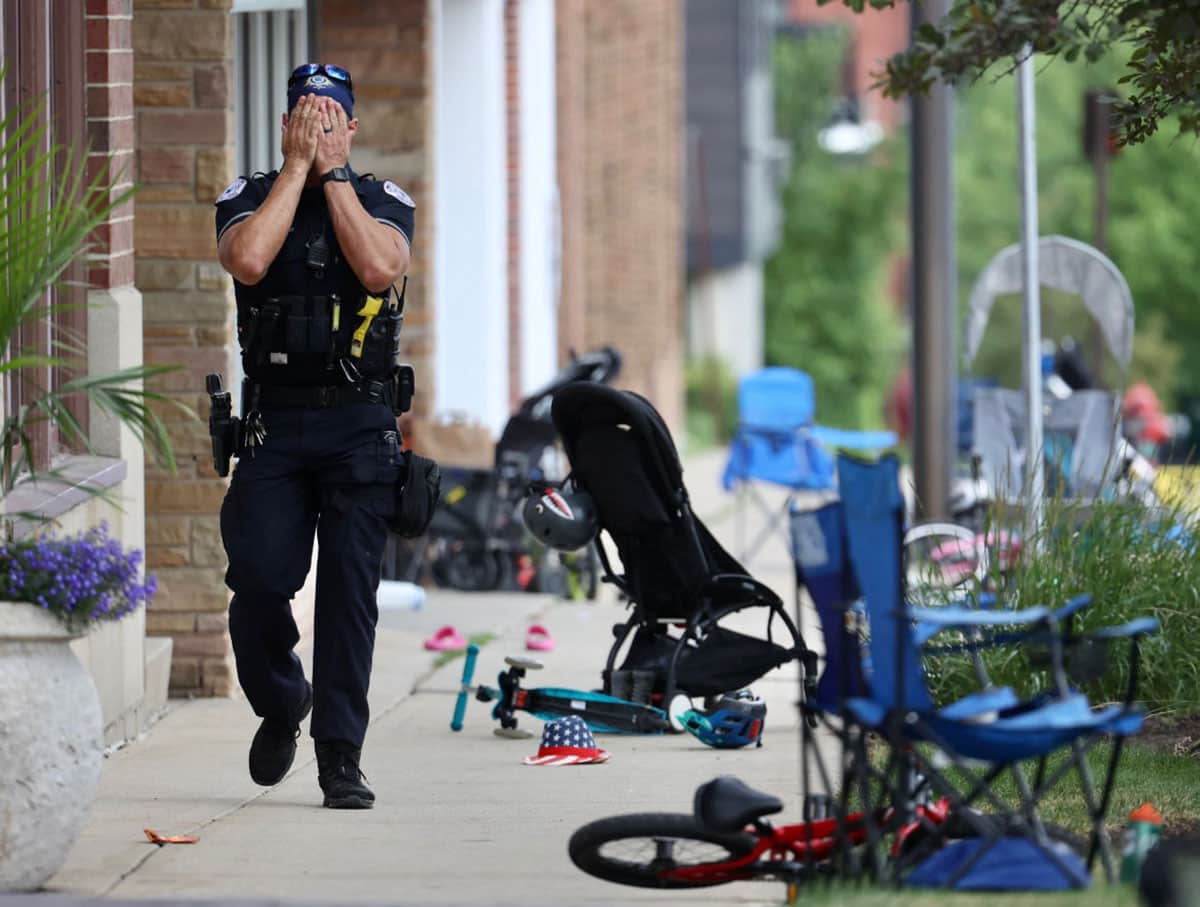 Can you imagine what George Washington and Ben Franklin’s reaction would be if they were handed an AR-15? Back when the constitution was written, they carried muskets. Protecting the Second Amendment is one thing, but common sense is another. I’m not asking my country to ban guns, but can you at least make it a bit more difficult to get my hands on one? Give me a few more hoops to jump through. In Illinois, I have to be a registered FOID card holder and there’s a waiting period, but maybe give me a few more.

The Boy bought a rifle at the flea market in Wisconsin. He wrote the man a check, exchanged information, and drove home to Illinois gun in hand. The sale took under 15 minutes including negotiating a selling price.

The old saying of guns don’t kill people, people kill people is an engaging argument often heard from the National Rifle Association. The NRA is so powerful that Congress allowed the 10-year ban on AK-47s and other assault weapons to lapse because of pressure from the lobbying organization. By the way, did you even know about the 1994 Assault Weapons Ban? Yes, during that ban, Columbine took place, but common sense still says guns enable killers. 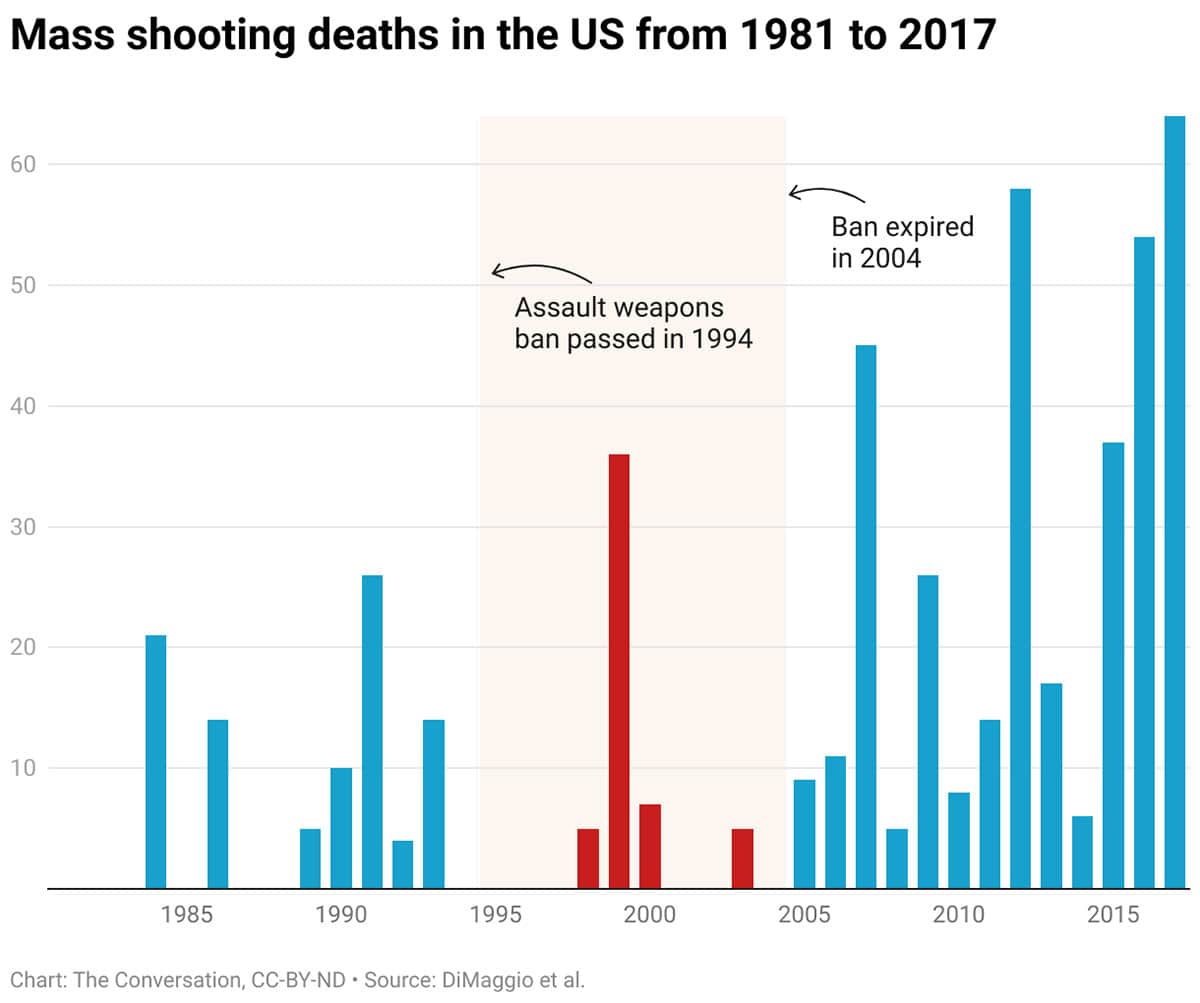 At no time during the ban, was there a clear and present danger to Second Amendment rights. Americans have and will continue to have the right to bear arms. We can uphold our constitutional rights and still keep assault rifles out of the hands of criminals, can’t we?

A few days after the Sandy Hook massacre, President Obama said, “Can we truly say, as a nation, that we’re meeting our obligations?” 20 years later, the answer is no, we are not meeting any obligations. Here’s a list of cities to prove it.

Those were just the locations of mass shootings from yesterday. Common sense says that’s a problem.

Growing up in rural Wisconsin, most kids in my elementary school had at least 1 gun and hunting season was a mandatory holiday. But my classmates were taught at a young age the responsibility of holding a gun. They were taught how to shoot a gun. They were told to only point a gun at what you are willing to kill.

When my son began hunting, he carried an unloaded Red Rider bb gun while pheasant hunting with The Boy. At the end of the hunt, if he followed his dad’s directions and practiced good gun safety, he was allowed to practice shoot at some cans. Duck hunting consisted of hanging out in the blind, cooking breakfast burritos on the portable grill, and teaching him how to handle an unloaded gun. That was the beginning of hunters’ safety. He was trained on how to handle a firearm responsibly. It’s common sense.

The fact that I don’t need to prove that I can shoot a gun to own a gun is mind-boggling. I’ve stood next to future gun owners at the Cabela’s counter in disbelief. Many are incredibly responsible, but for the 10 that understand the responsibility of being a gun owner, there’s always 1 holding a gun, pointing it at themselves, asking if they look cool, and waving it all around like they just don’t care. That’s a problem. To boot, you’re not required to purchase a gun safe or lock for the gun. That’s a bigger problem.

To obtain a valid driver’s license, you need to take classroom lessons, behind-the-wheel lessons, and pass a driving test. You also need to renew that license periodically. You need to prove that you are responsible and have the ability to operate a vehicle. Why does that same learning process not happen with guns? Just because cars didn’t exist when the constitution was written, doesn’t mean they shouldn’t be regulated.

And please don’t use the argument drunk drivers kill people so let’s ban cars. The little voice of common sense should whisper in your ear, “take an Uber home”. This is about being responsible, and if you don’t have the common sense to make responsible decisions, there should be laws and regulations put into place to help you become a more responsible citizen.

While I’m on my soapbox, Imma throw this out there because like I said at the beginning of this post, the answer is not clear-cut. There are layers and layers of politics, money, power, and fear. The following few paragraphs have nothing to do with gun control but everything to do with the mentality of the world we currently live in and how we got here.

To each and every one of us including myself. Stop arguing with each other on social media. We’re all guilty of it — the reality is you’re not going to change anyone’s mind. You’re not part of the Facebook police force. Practice kindness and please go back to sharing videos of baby goats wearing pajamas. America is incredibly divided. Covid did a number on all of us mentally and physically, and the blame seems to lie with Trump supporters or Biden supporters. Can we all just agree that everyone is doing their best in an incredibly screwed-up world? It’s okay to disagree with each other but instead of getting loud and defensive, just listen. You don’t need to object and respond with an argument. Just appreciate that person and scroll on.

An open request to news outlets and reporters. News should be news. Leave your personal opinions out of it. Please stop trying to make your story bigger and more bad a$$ than other news outlets. Your advertising dollars and flair for the dramatic are no longer welcome in my world. BTDubs, as I’m writing this, a news article popped up about how to tell the difference between gunshots and fireworks. OMG, who really needs to read that? That article was only written for money because more eyeballs on a page filled with banner ads equate to more revenue. Your profits and opinions are dividing our nation even further.

Career politicians should not be a thing. From senator to congressman to the mayor — a political position should be limited to 2 terms just like the President. Let’s use Dianne Feinstein for shits and giggles. She has held a seat in the Senate since 1992. As a Gen Xer that doesn’t seem that long ago but in reality, THAT’S 30 YEARS! Your constituents should have the opportunity to replace you after 2 terms. Anyone who has held the same job in the same position for 30 years understands a toxic environment. A changing of the guard is beneficial for all.

Whether you agree with my words or not, if you want the world we live in to get better, we have to do better. Vote, or run for political office yourself. Use your voice. Be the change and wake America up from this nightmare.

Big Companies Got The PPP Loans and the small business owners got screwed.

My brutally honest review of my personal application to the Biltmore Country Club.

The day my sister died.

My Life 1 Year Ago