Confidence is building with the home office design project as I push through Week 3 of the One Room Challenge. In case you don’t remember, last week, I was styling the window sill behind the vintage Chesterfield and finishing the build on my new workspace. A last-minute decision was made, throwing me off my game plan, and I chose not to use vintage indigo wedding panels and rattan I had found at a flea. My gut was telling me it was a bit trendy and overdone. Instead ordered up a beautiful mid-century modern style blush chair. I have my fingers, toes and eyes crossed that it arrives in the next couple of weeks…or at least before this challenge wraps. 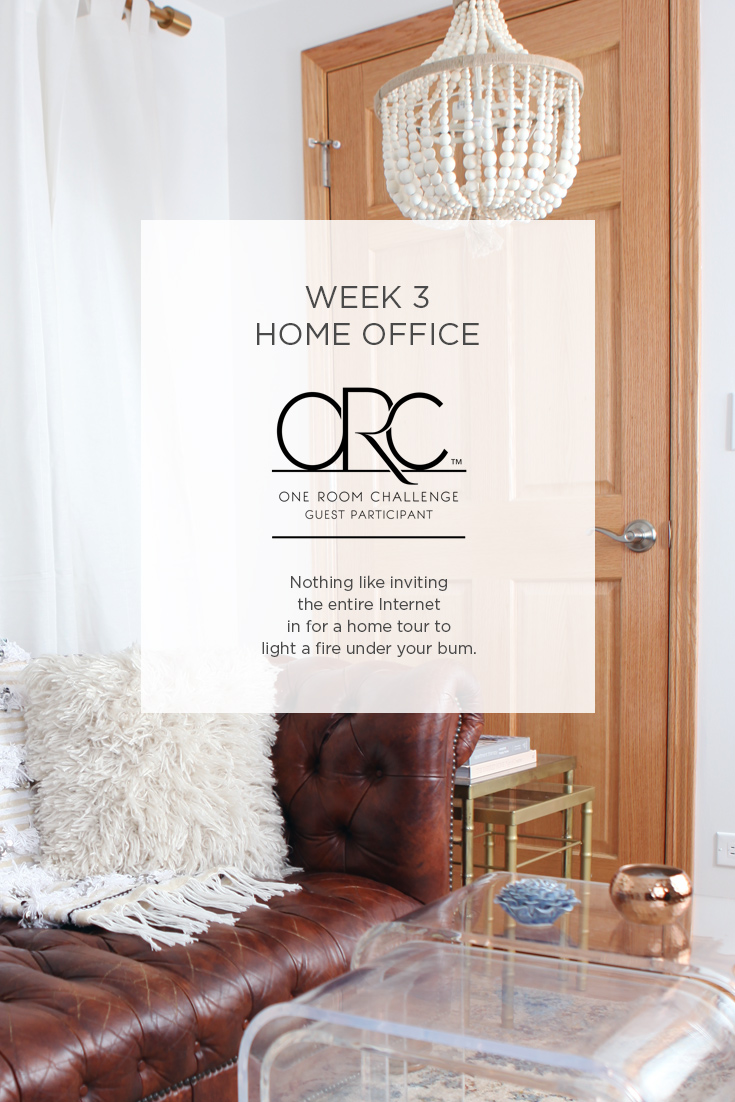 With the last-minute color palette change, I’m again on the hunt for pillows, vases, and more pretty home decor. I snatch the light pink IKEA pillow off my bed and laid it on the Loloi Anastasia Rug along with a pretty cream fuzzy pillow to test out what I thought in my head would look good. Yahtzee!!! You guys, it’s gorgeous with the rug!!! And thank gawd it does because I did this test after I bought the chair. The pink IKEA pillow kinda brings out the red undertones in the Chesterfield, so I’m searching for more of blush over pink…the pink guy was missing the master bedroom anyway, so back upstairs he goes. I found a couple of blush linen pillow covers at H&M. They arrived yesterday and are looking pretty sharp, but I need to procure inserts. There are also a couple at West Elm I’d like to check out. My plan is to get both in the room to see how they look. More on that next week though. 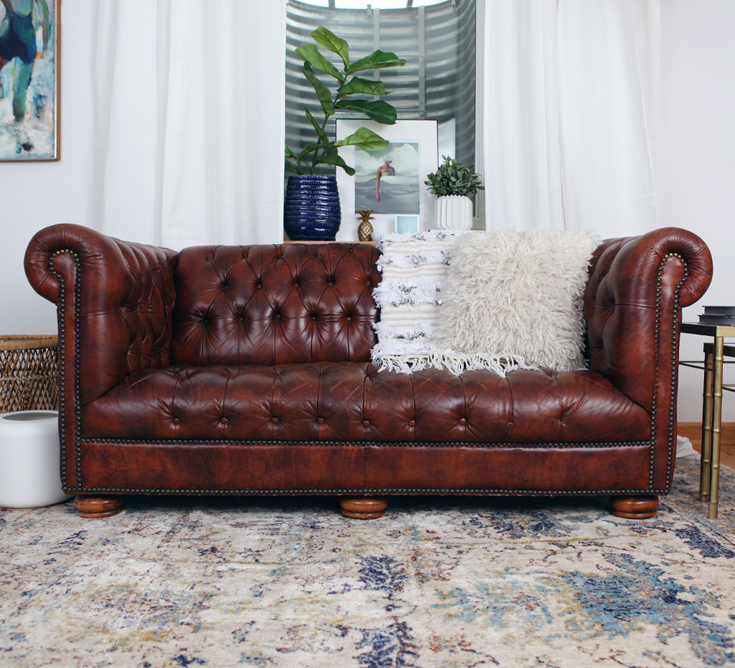 So what has been accomplished? Well, quite a bit. Mainly because I was under the gun with another incredible first-of-its-kind project. See, I teamed up with Erica Reitman, House Of Brinson, Making It Lovely, Fleurishing, Ibie Falcusan, and Megan Pflug for a Periscope Open House loop home tour. That’s right. Last Sunday morning I broadcasted a 15-minute live video of my home (and prayed not to trip or pass out while answering questions). Showcasing rooms that have been seen on Huffington Post and Refinery29, rooms that are working in progress…like the home office design project, rooms that have never been seen before, and rooms that were and still are complete disaster zones (the playroom, bathrooms, and kids’ rooms). BTDubs, if you ever want to catch me on Periscope, you can follow me at @houseofhipsters I’m trying not to scope as sporadic and get a schedule down, but it makes me a bit nervous.

Nothing like a pending live video feed, broadcasted over the Internets to light a fire under my bum and whip this room into shape. Especially when you’re teamed up with some amazing ladies. So last week, well, it was go time. Pedal to the metal. The electrician arrived Thursday afternoon to drill a hole in the ceiling and install wiring so I could hang the beaded chandelier. I would be at work in the city, so the night before, I dragged The Boy downstairs. We figured out exactly where it should be hung. Prepare all you want, but hilarity ensued when that exact spot didn’t work with the joists. The ever-patient electrician, Luigi, held this really heavy light a little to the left, a little to the right, while The Boy texted me pictures.

My painter, bless his heart, arrived bright-eyed and bushy-tailed first thing Saturday morning. This meant the night prior, the entire room had to be emptied. I snapped pictures of every vignette so I knew the exact spots of every vase, book, and bowl. Three coats of paint later, it was Sherwin-Williams Snowbound white. Fans were set too high, and I waited impatiently, literally watching paint dry.

After the kids were asleep Saturday night, The Boy helped me immensely. I wanted this room to sing for the Periscope Open House on Sunday morning. It was less than 12 hours away. I thought to myself, Beyoncé has the same 24 hours in the day that I had. This could be done, but the pressure was on. The curtains were to be hung along with installing the chandy and that amazing painting I found at the flea market. The pipe shelf (< that’s a link to the DIY instructions) needed to be reinstalled, workspace put back together. Everything needed to be restyled. Wahoo! Let’s hit it! The Boy was not nearly as enthusiastic as I. See, he woke up at 2:30 am to get “his spot” on the river. I happened to throw this decorating shindig on opening day of duck hunting season. Whomp! Whomp! Sorry dude, this is necessary.

But it seemed the decorating gods had been angered, or maybe it was karma balancing herself out for my good vintage treasure hunting fortune that I’ve had as of late. Every single task was completed not once, not twice, but three times a lady. The curtain rod was fussy. Then we missed a tab on the curtains, took them down, fixed the tabs, rehung, measured, and somehow the same tab was missed again. Swearing ensued. I told The Boy we must press on. It was 9 pm.

He started in on the beaded chandelier, or as it’s now referred to as, the light that tested our marriage that one night. Woah, baby, this bad boy threw us for a loop, and presently I’m unsure if it works. First, we took it out of the box, and 2 strands of beads were not connected. After playing arts and crafts with fishing line and a whole lotta patience, we had to modify the chain and wiring (which the directions state not to modify unless completely necessary, but unless you have 40-foot ceilings, you’re modifying that puppy). The stickers stated which wire was which wouldn’t fit through the tiniest hole known to man and the wires stripped leaving us guessing at which one was hot. Of course, it requires funky lightbulbs because God only knows I like to be difficult.

There we were, standing in a dark office, middle of the night, with my arms over my head, holding up a lamp that seemed to weigh 79 pounds for what seemed like an eternity. The Boy, wearing a headlamp, as if he were spelunking, muttering curse words that would make a sailor blush. I was told, “Don’t move! Stop shaking! Grab me a screwdriver! Not that one, the flathead!” I stood on my tippy toes in my little box of pain thinking only about kittens and unicorns. Then the bracket didn’t line up with the plate. Frick-n-frack. After an hour and a half, it was hung. We backed away slowly. If it’s wired incorrectly, well, it looks pretty, and that’s what really matters right? Because that sucka ain’t comin’ down again. No way José. And as an aside, I think it should be mandatory for all manufactures to install their product prior to selling. It’s only fair.

While The Boy finished hanging the painting, I framed up some artwork by Heather Chontos and my warrior dog (both artists are also showcased in my master bedroom). The original Heather Chontos piece, I’ve had for quite some time. It’s been begging for the perfect spot…it’s finally found a home. I couldn’t help myself, I started to style the desk. This is kinda how the workspace has ended up.

That little brass pineapple clip was picked out by Ashley from Bigger Than The Three Of Us. (She’s also participating in the One Room Challenge.) We met up (for the first time ever!) at The Randolph Flea. Before she and her husband took off, she wanted to stop to pick up a cute oversized brass “Pocket Change” tray. She has a newfound addiction. I was very grateful after she picked up the clip because she looked at me and said you need to buy this…why yes, yes I should! Because I love it! Oh and that blue and brass cylindrical thingy is a kaleidoscope from Emily Henderson.

So, what’s next? Well, there’s still quite a bit. I refuse to be the person on Survivor who says, I’m in complete control over my tribe only to be voted out at Tribal Council the following evening.

1  If you noticed the first few desk pictures above, you might have seen my lamp dilemma. I need to decide if the vintage white lucite striped lamp from a Chairish Instagram Sale stays or if I play it safe and use the brass task lamp. I’m leaning towards the lucite lamp, but still playing with the shade. What do you think?

2  Finalize pillows…blush and cream. H&M vs West Elm. Does anyone have any other suggestions?

3  Order new Minted artwork…I did that today and it should ship soon.

5  Order bowls, vases, find books, and any other decor needed for styling out the space. Know of anything that would look amazing?

6  Something needs to go on the right side of the Chesterfield…I’m thinking a large palm, but it needs to be fake since I’m in the basement.

7  Work on my mood board on the wall above my computer.

10 Small white pot from Unison on the floor to the left of Chesterfield needs a plant or something??? Maybe??? What do you think?

14  Shoot the grand finale! Which hopefully you noticed…I finally lit this room properly. I tried my best to use natural lighting, but just couldn’t. I brought in the big guns. My photography lighting. It looks so much better!

So I have a sneaking suspicion this list above is not even going to be close to half done by Wednesday of next week. I have no fire right now…the fire is tired. I’m no longer channeling Beyoncé, because even Beyoncé gets tired. And also, styling for me takes a lot of time, and for MY home office design project,  I’ll probably be styling vignettes until my fingers bleed. I can’t help it. I’m a perfectionist. But, I’ll still check in with a progress report…just don’t expect leaps and bounds like this.

Affordable Decor On My Radar

Cambria Quartz For The Kitchen Makeover