Happy Wednesday you guys! I have to tell ya, I didn’t think much could top my getaway weekend at Camp Wandawega, but let me tell you, I think I died and went to junk yard heaven when walked through the pearly gates of the Elkhorn Flea last Sunday morning. Now, I’ve been to many a flea, but I’d have to say this is one of THE best I’ve ever attended. We boogied out of camp a bit before 7AM and got on the road, stopped at an ATM and we were off! Thankfully, we got the inside scoop on a shortcut as to not sit in line on Hwy 11. That’s right, there was a line! A huge line! Like nothing I’ve ever seen before. Over 500 dealers and this was not your Kane County tube socks show. This was the real deal. Merchandise from furniture to glassware, linens to boxing gloves. 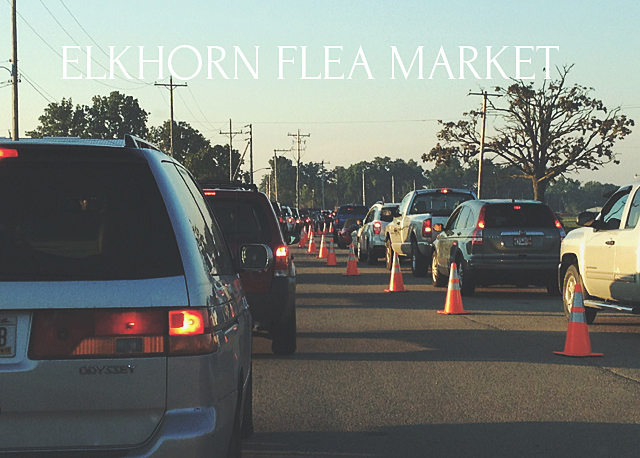 The Elkhorn Flea happens four times a year and this happened to be their last show of the season. It took us about 15-20 minutes to pay and park. Yowza! Since I wasn’t familiar with the layout of this event, I stuck to my normal routine. I started at the furthest barns and worked my way forward then through the fields. My theory is since I was 15 minutes later then the other early birds I wanted something a bit fresher in hopes it had yet to be picked over. This gal doesn’t like to miss a deal. Normally I bring a couple hundred bucks with me and come home empty handed. I’ve been doing this for so long, and since I’m very particular, it really has to be a stand out piece to come home with me. 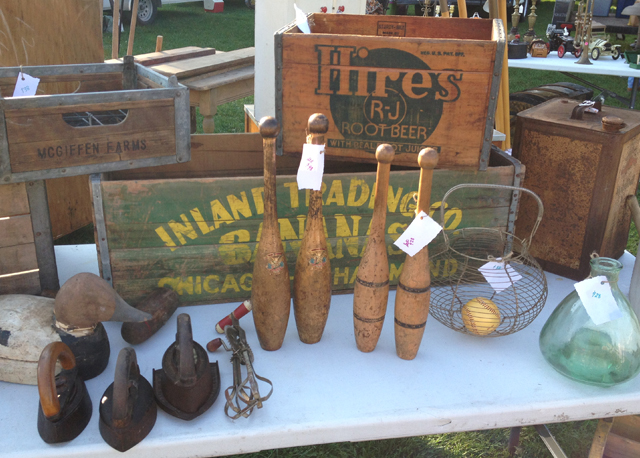 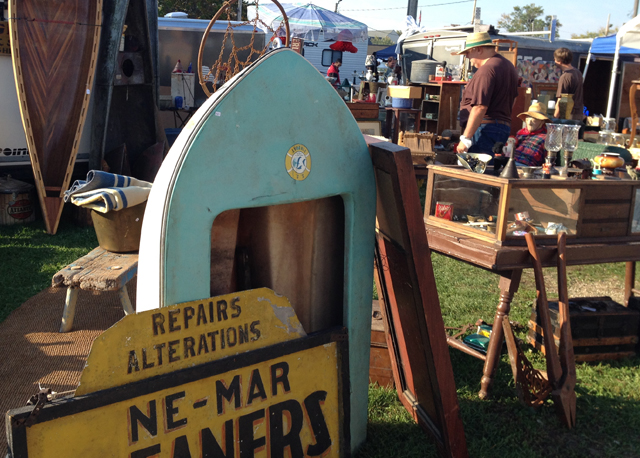 The barn I started in had 3 entrances and 6 rows. First booth I hit had this great weathered old chair for $5. BOOM! No negotiations, that was a great deal. Sold. The boy, who is not a flea type a guy, but rather a very good sport, looked at me, shook his head and offered to take the chair back to the car with a smile on his face. Such a nice guy I married! Why yes! Thank you very much! Because the last thing I want to do is haul this old chair around for the next 4 hours like a pack mule. He took off and unbeknownst to me, received 6 different offers on the chair during his journey to the parking lot. I told ya it was a good chair!

By the time he got back to the barn, I was just starting in on my second row. I had an old fraternity paddle from 1966 given to Lord Kremer from Scum Pinney, a canoe paddle and a skateboard in my hands with a glint of crazy in my eyes. This flea was the B.O.M.B.!!! I was grabbing items by the armload and little did the boy know, I had stuffed 3 additional tiny treasures in my backpack already while he was gone. He gave me a weird look and asked me if I had any money left. Hmmm, this could pose to be a problem. I maxed out the amount I could take from the ATM for the day. Credit it was! 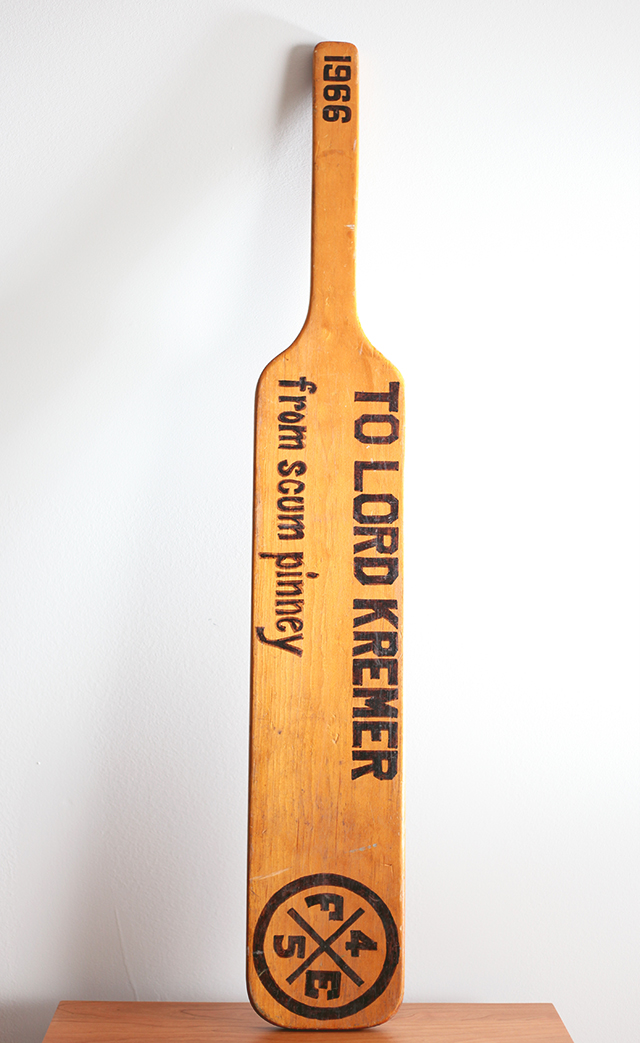 I found a few old pictures that had to come home with me and got myself out of the first barn. Phew! By this time the boy was on his second trip to the car…hands full of what I’m going to keep calling treasures…it was definitely not junk. Well, to me it’s not. Upon his return I was eyeing this A-MAZINGLY HUGE megaphone! It even had the cheers and all the positions typed up on yellowed paper on the inside! It was in fantastic shape and had the name “JEAN” written on the side. I was smitten. The guy wanted $65 for it. Yikes. I was already about a hundred down from the first barn. This purchase would leave me with less then $50 to my name and I had only been there for 20 mins. No one seemed to take a credit card at this flea. Holy crap. This never happens to me. And who doesn’t use Square these days! Geez! What was I going to do? The boy walked up behind me while I was asking the nice gentleman if $65 was firm on the megaphone (which it should have been). He brought it down to fifty bucks. Better, but it still left me in the same boat. I needed to walk. I was regretting my $15 canoe paddle purchase since I already had 3 at home. Damn. 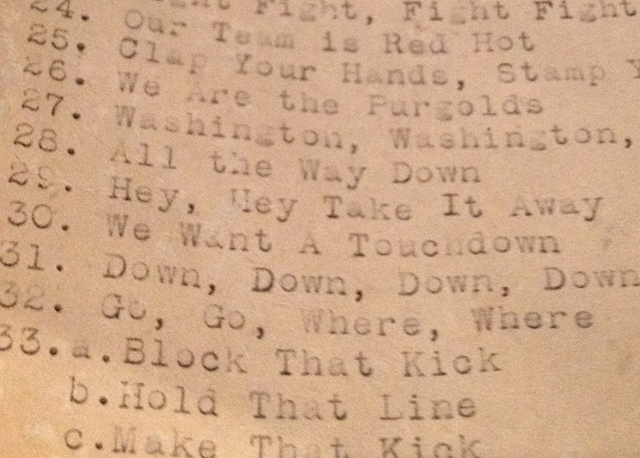 I told the guy I really liked it but explained my situation of already blowing thru half my wallet and was only 1 barn in. I told him I’d stop by before we left and if it was there, I’d buy it. Leave it to fate. I hung my head and sadly walked away. That’s when I hear, you can have it for $40. My heart skipped a beat. The boy looked at me, and he knew I wanted it. He could see it in my crazy eyes. He must really love me because he looked at the guy and said, “I’ll buy it for her for $40.” YAHTZEE! We shook the guy’s hand and thanked him (and the boy) profusely. Suddenly, he realized what he had just done to himself. He had won himself another trip to the car. Third on in under 30 minutes. I’m serious you guys…he’s a keeper! 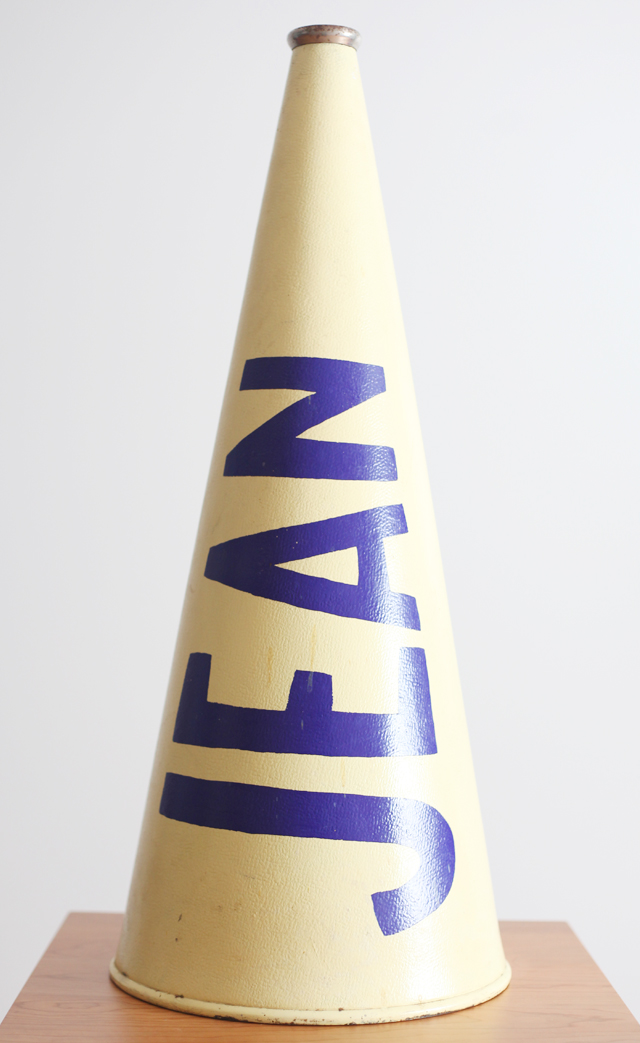 Again, on the way to the car, unbeknownst to me, offers were rolling in on the megaphone. I wandered around reminding myself to be frugal. That is until I found a big bag of ivory colored dominos. They were awesome and bakelite. Ten bucks…I’ll take them. The boy hadn’t returned from the car. I wandered some more and suddenly my eyes became giant saucers. The booth vendor must have seen me light up like a Christmas tree because he yelled over (since I was like 50 yards away), “The price is double if you’re actually from Baraboo!” But I was from Baraboo! Here was this banner that said the name of my hometown. I don’t care if this sucka is $1,000, it’s coming home with me!!! Well, lucky for me it was on the half price table marked at $20…I got it for 50% off. $10 total. Boom! Score of the day! The boy walked up behind me taking notice of my additional bags and asked if I had anything left. 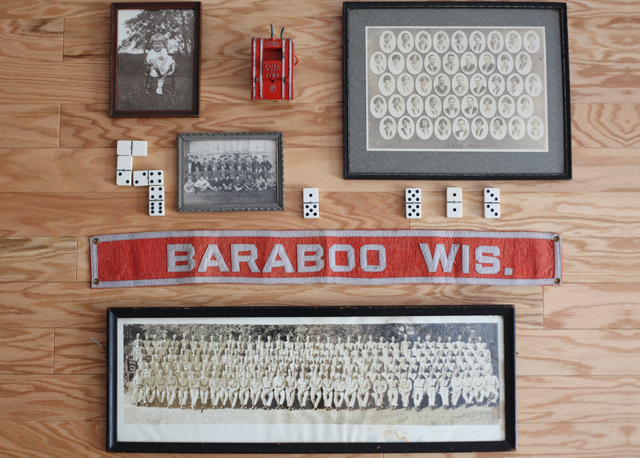 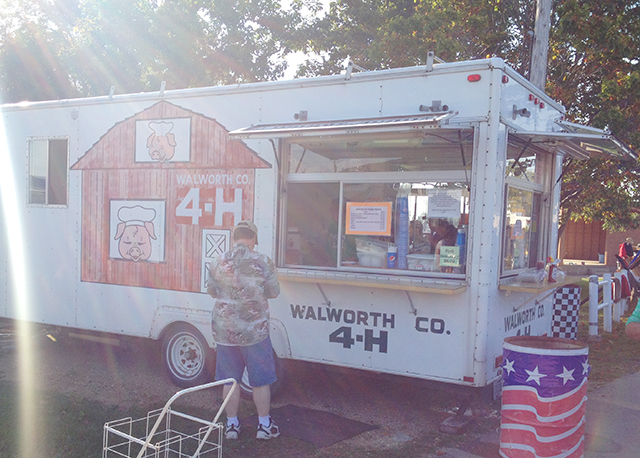 But then it happened. We hit a dry spell. My streak was over, and that was probably a good thing. We walked around for a while longer. Found a couple other items, but that was about it. Grabbed some coffee and a deliciously greasy hash brown from the 4-H trailer and walked some more. Before we left, I did wind up finding a great vintage American flag that some great patina to it that was hiding in a booth way in the back of the fairgrounds. It will be hung on the wall shortly. Also randomly heard a vendor blasting my favorite (obscure and unknown) band PHOX and chatted with him for a bit. He tried to tell me they were from Milwaukee…ya no dude…they are from my hometown. Little old Baraboo. 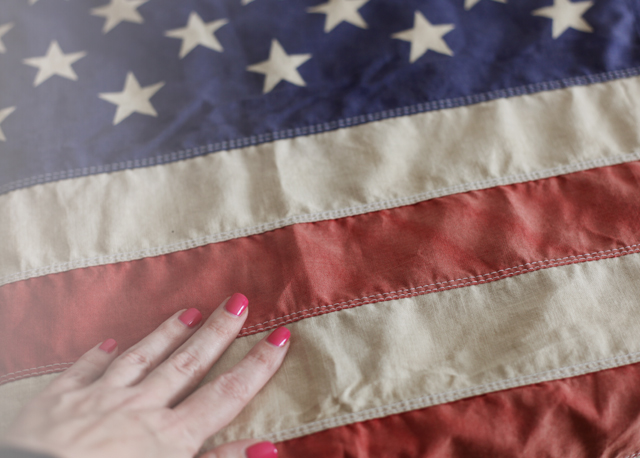 All in all, we (I) had a fabulous time. The boy did find a treasure of his own, so he left a happy camper as well. We had some great people watching as this place was filled with hipsters, hoarders and down right weirdos. From the two dudes dressed as clowns sans face paint to the guy standing in the t-shirt that read, “I’m with Bob” and standing next to another guy wearing a shirt that read, “Hi, I’m Bob” to Hippie Tom and his crazy hand painted wares. After this trip I fear I’m starting to walk the line of hoarder. I left about 4 hours after my arrival in an SUV that resembled the likes of a traveling hobo.

So on a random survey, next year if I kinda made some planning, would anyone be interested in attending this with me?

Sometimes your hands are full and it's just easier

Meet Comet! When he moved in, my world was turned