Confession — there’s a wall in my home you never see. The dreaded tv wall. A big black box eyesore that every home decor enthusiast tries to hide. Most people say, just deal with it, and I get it. That’s exactly what I’ve done. It’s a part of life. Almost everyone has a tv, and in my home, there’s no living without it. Function over form accepted — that is until now — meet The Frame TV by Samsung.

UPDATE: We loved The Frame tv so much, that we bought 2 more. One in our primary bedroom and another for the home gym. 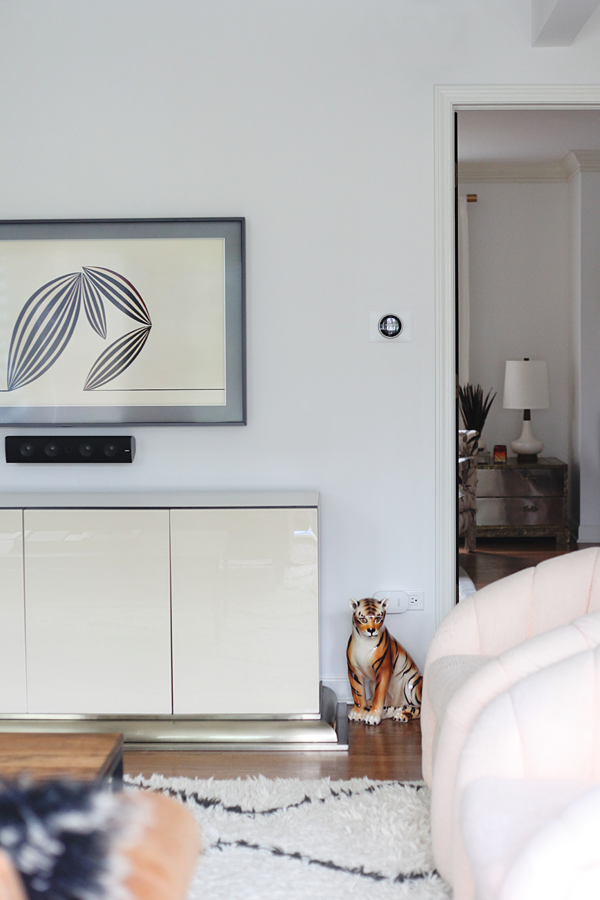 Interior designers and stylists have gone through extreme lengths to cope with the the centerpiece for home entertainment. Remember watching Trading Spaces? Genevieve would have hunky Ty Pennington build some crazy cabinet contraption to hide it, while Hilde tried gluing hay to a wall camouflage it. Oooph! Palm to forehead. Then there are the people who fully embrace the TV.

When I first met The Boy, he had one of those gigantic projector style televisions. You know the ones that every bro had to have back in the day. It was as tall as me and took up entire wall. Then he added huge speakers to either side. Perfect for every man cave. 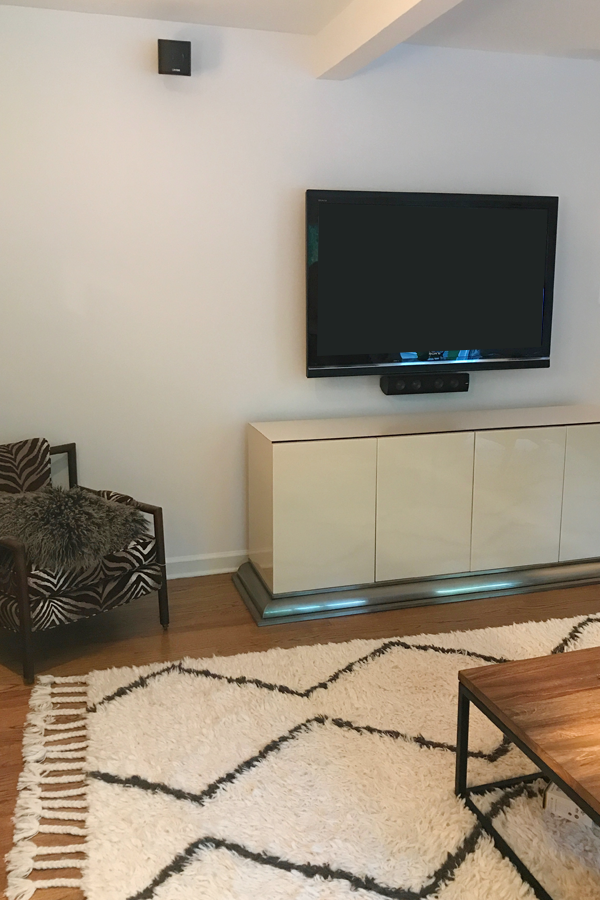 After we were engaged, I finally convinced him to replace that monster with a flat screen tv and that has been hanging on our wall for the last 10 years. The components have been tucked away in a beautiful vintage Ello cabinet I never photograph, and all the ugly wires are tucked away behind the drywall. As good as it gets, right? Well, it’s better, but definitely never a wall I’d post to Instagram…that is until today.

Santa arrived early and dropped off The Frame TV by Samsung. The Frame TV chameleons itself into art when not in use. Wait, what the what? Yes home decor enthusiasts, you read that right. The geniuses at Samsung invented a slick new black box that when you’re not watching TV, it turns itself into a picture frame tv. Insert screaming emoji!!!! 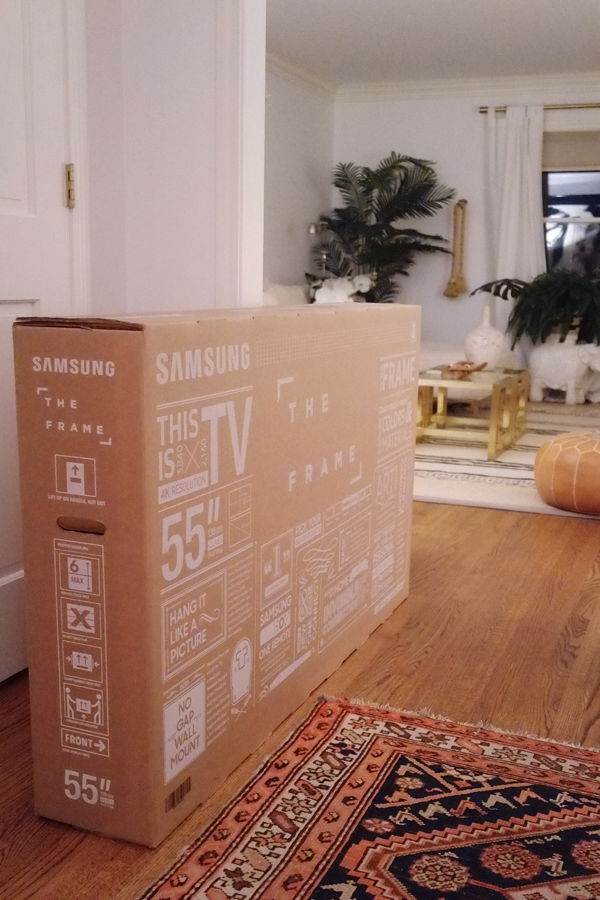 I was giddy and dancing with excitement when it arrived. We pulled it out of the box and my jaw was on the ground. More beautiful than I could have imagined. The Frame tv is as deep as a picture frame and lies flush to the wall thanks to the No-Gap Wall Mount. Suddenly my 10 year old flat screen looked as clunky as The Boy’s old projection TV from back in the day. 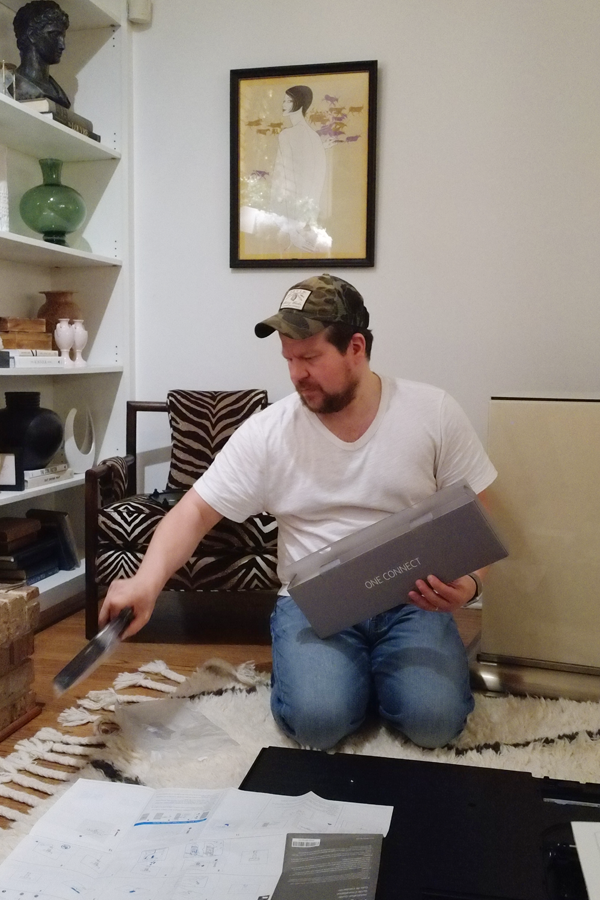 The whole installation of this art frame tv took less than an hour, and the only set back we encountered was dealing with all the duct work behind the wall. Once The Frame tv was hung, we turned it on and shazam — let there be TV. Added bonus, things like WiFi and NetFlix automatically installed with the phone app. It just found everything on its own. Gotta love it when technology is smarter than you. 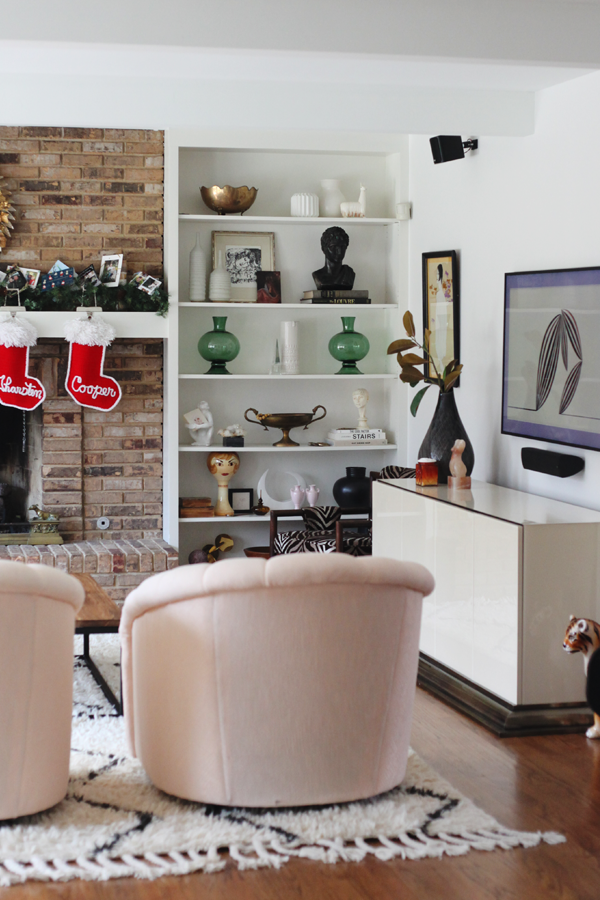 Much to my family’s dismay, the first thing I chose to do was peruse Art Mode. That fun lasted about 8 minutes because Zoe was trying to attach herself to my body as a permanent appendage. I gave in to watching Teen Titans Go. 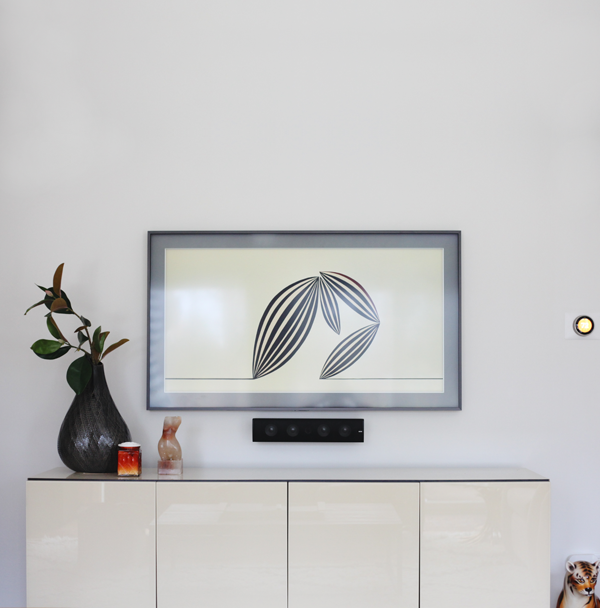 Over the next month or so, I have a big decision to make. Do I blend The Frame into my decor as a picture within a gallery wall, or just showcase one large piece of digital art? I’m leaning towards keeping it minimal since I have the built-ins. I also need to figure out the surround sound speaker to make the look completely seamless. Any ideas out there? The Boy is bent on keeping it. 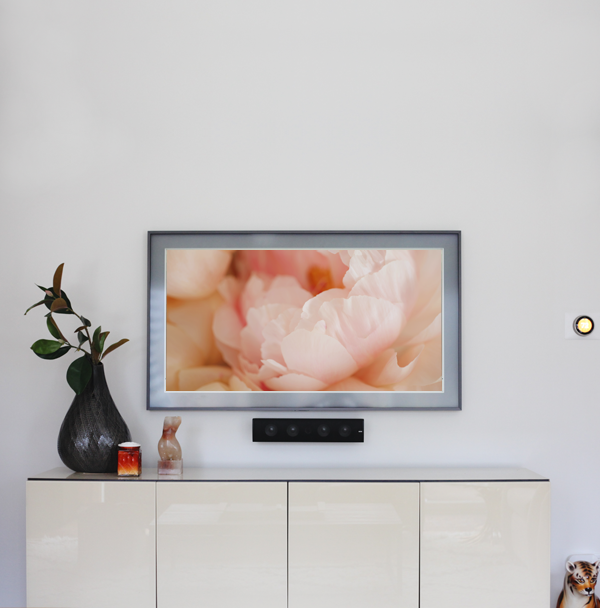 My capture of the pink peony petals seems to be a favorite I return to, but it’s fun to change it on the fly to a family picture of when my children — especially when they are acting like demons. See, they really do love each other. 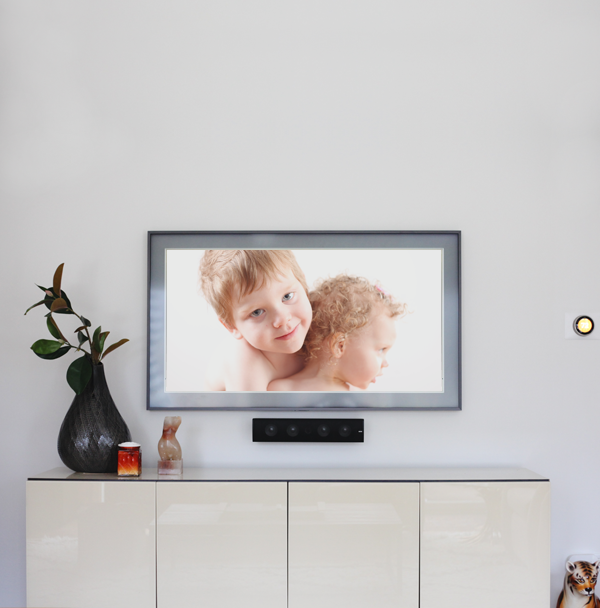 I do think I’ll be swapping out that black frame with one of the customizable bezels. I’m digging the light beige oak, but the interchangeable bezels are also available in White and Walnut wood.

One thing last feature that deserves a mention is the 4k resolution. The ultra high definition takes some getting used to. On the first night, after the kiddos when night-night, we decided to watch the season finale of Curb Your Enthusiasm. While sitting on the sofa, I looked at The Boy giggling and said, “OMG, it looks like Larry David is actually in our living room!” It’s so crisp, I really felt like I could just touch his face. Over and over we kept looking at each other and saying, I can’t believe how real it looks!

For this post I received The Frame TV to review from Samsung. All opinions are my own and always will be. Thanks for supporting the content that keeps House Of Hipsters going.